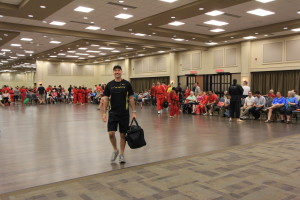 For this father’s day, I would like to tell you about my friend Paul Conway. Paul is a loving husband to his wife Joanne, a doting and proud father of his daughter Jamie, and my sons’ favourite uncle. Paul and I are close. He has been my karate partner for over seven years.

There is a certain trust that is established when someone grabs you and throws you down to the floor or throws a kick or punch that gets within a hair of contact. And even when we got hurt, and we did many times, we would laugh it off because the move was done right; and you just had to pick yourself up and do it again. You would try to do it even better the next time.

He was a motivating force of encouragement epitomizing for many people the drive to do the best you can, work hard, not be afraid to take risks, to learn a new skill and apply oneself to achieve their goal. He participated in two gruelling black belt tests earning his first and second degree black belt with the greatest honours and respect from the Senseis and his fellow students.

Paul took the time to teach others. He was a stickler for learning the proper karate techniques to defend oneself. He used humour mixed with a strong work ethic; a seriousness that futzing around gets you nowhere. He had all the time to help others who were serious about learning a new skill. He offered words of encouragement and valued honour and respect for others and conducted himself as he would expect others to do.

Despite his cancer diagnosis of B-cell lymphoma more than five years ago and three complete courses of chemo over those years, he did not let it stop him from living a full life. He took up learning to play the guitar (he loved Mississippi Delta Blues) using his grandfather’s acoustic guitar. He walked the neighbourhood with his Labrador retriever, Yukon. He loved to cook both in the kitchen and the BBQ. He developed a great BBQ rib recipe using his Green Egg BBQ on the patio. He tackled action photography. He earned the aforementioned black belts, and participated in life as we all do. There were never any excuses; he showed up to work and applied himself to whatever task he faced.

He was all about focus and striving toward excellence. He was perpetually motivated and his influence on others was palpable. During our training he would post motivational quotes from famous historical figures on the front mirrors of the dojo. He would add to the list creating a collage posting a new quote every week during the six months of training. He would give pre-class speeches about working hard and as a team to encourage one another to push to reach our goals. He earned the respect of his colleagues and friends. He was a go-to guy when people had problems to solve. This was evident in the dojo as well as in his private life.

He cared about his friends even when they seemed not to care for themselves. He would express his frustration to me about several of his longstanding friends who chose to not care for their health or assume responsibility for the physical ailments they developed. Indeed their lifestyle choices made their conditions worse and it drove him crazy to see it.

Given what he had gone through, it was understandable that his frustration stemmed from how precious life is and how callously some throw it away when they have the ability to grab it and move forward.

Although he knew that there were no more options for further treatment after his last relapse, one of the last messages that he sent to me two weeks ago said that he was at peace and accepted his fate. He did not want to know when the day would come but we all hoped that it would not come so soon. Paul died this past week at age 52.

Paul’s message to all of us is one of loving our friends and family, being honest and addressing issues and problems head on, not avoiding conflict if the purpose is to help others and oneself. In some ways it is a metaphor for life. It is not easy. There are barriers and problems to face; physical and emotional obstacles that test our ability to cope and overcome them. Some succeed, some do not. He succeeded beyond measure

If you haven’t tried a Kilkenny, please do. It was his favourite beer. Raise a glass to him. You may not have known him but I think you would have wanted to. For all the fathers listening, hug your children. Life is precious and sometime people leave us earlier than we expect.

I leave you with this song that he was played on his guitar when we last visited him.